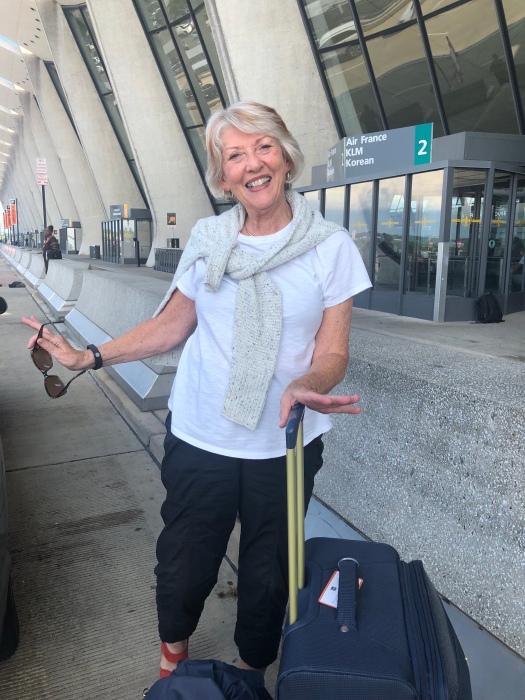 Today marks 3 months since I arrived in France on my 70th birthday on a “long stay” visa. It began as a year’s adventure, and has evolved into an open-ended journey. It is the first time I have traveled to France with no end date and no sense of pressure to get everything done, to see everything I want to see because I’m not sure when I’ll be back. This makes for a whole different concept of time and experience where I can just relax and let each day unfold.

Another American I met yesterday asked me a good question, I thought, which was, “Has your experience so far of living in France been what you expected, or more or less than you expected!?” I answered that I wasn’t sure what I was expecting, exactly, and that I knew for sure I have not been disappointed; nor had any feelings of discomfort; nor nostalgia about my life in the U.S.; nor have I been sad or thought for one moment I had made the wrong decision! I guess that’s saying a lot. I can also go a step further and declare that this feels like home to me more than I have felt at home in a long, long time.

I have wanted to make my life here as normal and unstructured as possible. I am not only living in a new country, I am retired from my very rewarding work as an acupuncturist for 25 years, so everything is new to me.

When I was here in April of this year, I met a few women who have become good friends. I have added a few friends, both women from the States and women from other countries, like Morocco, Vietnam, England, and France. I am part of a couple of groups who meet periodically, and have done some traveling within France so far, including Lyon back in September (see post “The Colors of Lyon”); Bordeaux, in October (and hope I can write about that wonderful experience at some point); and this past week, I traveled to Les Baux de Provence where the grand exposition of VanGogh and a Japanese artist’s images come alive in an immersive musical and light display inside Les Carrières des Lumières (www.carrieres-lumieres.com)which is a venue carved out of limestone rock. That trip will require a whole blog post to itself as getting there without a car and with the trains on strike and flooded out, was a real “trip.”

France is a beautiful country. Every day, everywhere, I find something that takes my breath away. I have truly gotten in touch with AWE since I’ve been here. Speaking French every day and hearing myself improve in both my speaking and my understanding of fast-spoken French is one of the reasons I wanted to come. French is a beautiful language, and being able to speak it and have a real conversation with someone is such a feeling of accomplishment and joy. I love walking for miles every day and not having to get in a car to go everywhere. Having legs that carry me has become a daily acknowledgment and true blessing, especially when I think of friends and family who have knees and hips that need to be or have been replaced. Do we take these gifts for granted? I will not take mine for granted again! I recently met and am coming to know, a woman named Jeanette (Mai) born the same year as me, whose mother was born the same year as mine, and whose mother was Vietnamese and father French. She wrote a memoir which I read in two days! (Waltzing with the Dragons) It was such an eye opener for me to read about this woman’s life which was happening at the same time as mine, yet halfway around the world in a war torn country from which she had to flee, and whose mother was banished from the family for refusing to marry, at 13, the man her mother had chosen for her. Our lives to this point couldn’t have been more different, and yet here we are, living in the same town in France, and have discovered that we do have some things in common now. How very fascinating this is for me.

So, yes, I have traveled far in both my personal life development and in distance from my native country, and I am learning new ways of being, new ways of doing, new ways of thinking every day. And as far from my roots as I have come, I believe I am finally home.