All my life I have identified as someone’s daughter, sister, cousin, wife, mother, single parent, aunt, as well as student, acupuncturist, homeowner, teacher. And for most of my life, each of those roles has been played out for many years. Who would I be without those identities? Without all the labels of family and career, who am I, and is it consistent with who I know myself to be?

Two years ago I made a decision that has had an effect, even an earthquake kind of effect, on most of those identifiers. All my life I was obedient, responsible, dutiful, professional, and dedicated to being the best I could be at each of them. As I held many of those roles concurrently, of course I wasn’t perfect, and I knew where I stood among the surrounding relationships and what my connection and responsibilities were to each of them. As a would-be drama major in college, I knew how my part needed to be played and how each line, each movement, each decision and action would affect the other players, and knew that any change, ad lib, unexpected action or utterance could affect every other performance in the play.

END_OF_DOCUMENT_TOKEN_TO_BE_REPLACED

Trimming my Red Bud and Japanese maple for the last time before the new owners would move in in 2 days, I had an “AHa” moment! With all the rain in the past weeks, the overgrowth was fierce, and I just had to trim a few things back. With each cut of the lopper, the heavy, low-lying branch would SPRING UP skyward and dance there a moment before coming to a stop in its new place high above the ground. And with each cut, the tree would “S-w-i-s-s-h-h”  as if releasing a big sigh and saying, “Ahhh, I feel so much lighter now.”

One month since I’ve been back from France and when I got home, I hit the ground

running. Four weeks to pack up and move – some things to store, lots to consign, and the rest to donate. Given that I’d been working on this for 2 years, I would be on Easy Street. NOT! Never had I anticipated the amount of stuff I still had left to sort and toss, and where to put what I was keeping with me. With no new home to go to, all of the remainder would be in suitcases, and several Wegman’s bags going with my vagabond, homeless self until I left for my long-stay in France.

I must admit that there were some days when I wasn’t sure I’d make it. It was getting down to the “little” things – things I can’t even describe like a zillion pens and pencils; pads of paper; my extra supply of batteries, boxes of Kleenex, plastic wraps and bags; hangers galore; a “medicine closet” FULL of remedies for whatever ailed me, or whatever might….and still more photos! Never an end to loose photographs representing moments of my life, significant and banal. It all had to go somewhere!! SO MUCH WASTE is what I kept thinking…so much to contribute to an already over-full landfill. I gave away as much as I could, even things like an old Fuller Brush push broom and dustpan brush (am I dating myself?) that belonged to my father, which my landscaper-handyman really appreciated! I remember so well when the Fuller Brush salesman came to our door with his suitcase full of brushes for every task! We always bought something.

One particularly stressful night, late, I still had clothing in the closets that had to be sorted into “store for 1 year, keep at a friend’s for next season, and take now.” I was far from finished, and I was exhausted. So much so that my brain just wasn’t functioning…and I couldn’t stop – the movers were coming in the morning. 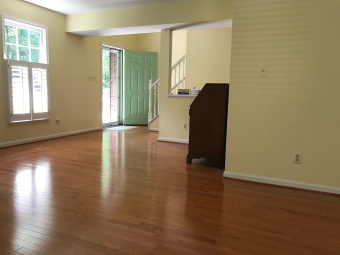 And they did. Five of them! They worked for 4 hours, boxing, labeling, wrapping; and sorting into “Storage,”

“Consignment,” and “Donation.” They were amazing, and just watching them work gave me some peace of mind. As my family heirlooms were turned on end, my mother’s paintings wrapped, and things were carried to the truck, I watched as my home became, once again, an empty shell. I thought, “….and as we all must do, we return to the beginning.”

And, although not right away because first came the tears and boo hoos as I said goodbye to the home I’d known for the past 14 years, and recalled the many life stories that were created while I was in this sacred place, I could feel myself lighter, springy-er, and higher off the ground. Now, I could see with new perspective and, like my Red Bud, dance with a lighter step.